The aftermath of Israel's raid on the Gaza aid flotilla: is Turkey a new rogue state? 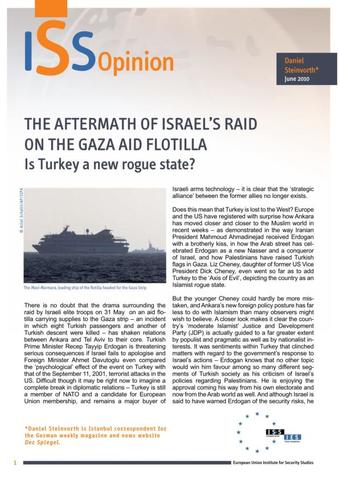 There is no doubt that the drama surrounding the raid by Israeli elite troops on 31 May  on an aid flotilla carrying supplies to the Gaza strip – an incident in which eight Turkish passengers and another of Turkish descent were killed – has shaken relations between Ankara and Tel Aviv to their core. Turkish Prime Minister Recep Tayyip Erdogan is threatening serious consequences if Israel fails to apologise and Foreign Minister Ahmet Davutoglu even compared the ‘psychological’ effect of the event on Turkey with that of the September 11, 2001, terrorist attacks in the US. Difficult though it may be right now to imagine a complete break in diplomatic relations – Turkey is still a member of NATO and a candidate for European Union membership, and remains a major buyer of Israeli arms technology – it is clear that the ‘strategic alliance’ between the former allies no longer exists.

Does this mean that Turkey is lost to the West? Europe and the US have registered with surprise how Ankara has moved closer and closer to the Muslim world in recent weeks – as demonstrated in the way Iranian President Mahmoud Ahmadinejad received Erdogan with a brotherly kiss, in how the Arab street has celebrated Erdogan as a new Nasser and a conqueror of Israel, and how Palestinians have raised Turkish flags in Gaza. Liz Cheney, daughter of former US Vice President Dick Cheney, even went so far as to add Turkey to the ‘Axis of Evil’, depicting the country as an Islamist rogue state.

Israel and the Free Gaza flotilla: a catalogue of mistakes