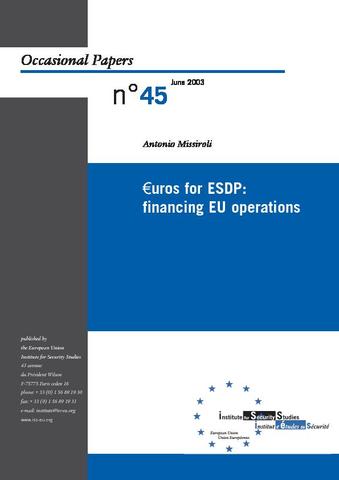 The financing of EU-led crisis management operations is a somewhat neglected yet nevertheless crucial factor affecting the external effectiveness and internal consistency of the Union’s foreign and security policy. Until recently, CFSP’s operational acquis has been minimal, its legal underpinning limited and tortuous, its budgetary fundament ludicrous, and its administrative practice mostly contradictory and often fraught with inter-institutional turf battles between Council, Commission and Parliament. With the launch of the first ESDP operations proper (EUPM in Bosnia and Herzegovina, Concordia in FYROM) in 2003, the forthcoming Operation Artemis in the Democratic Republic of Congo and the possible takeover of SFOR after 2004, it has become all the more important and urgent to devise more appropriate arrangements and incentives for common action. The European Convention and the ensuing Intergovernmental Conference represent additional opportunities to be seized. In this respect, the main issues to be addressed regard: a) the speed and readiness of budgetary allocations, on the one hand, and their long-term sustainability, on the other; b) the coherence of the relevant provisions, in both institutional and functional terms, and their consistency with the peculiarities of the EU as an international actor; and c) the degree of transparency, accountability and internal fairness compatible with the imperatives of crisis management. The experience of other international organisations operating in this field (NATO, OSCE, UN) can also be taken into consideration with a view to selecting rules and modalities that may be helpful in tackling the problems highlighted here. First and foremost, it is desirable that the current fragmentation of CFSP expenditure in separate EU budgetary lines be overcome. The appointment of an EU ‘Minister for Foreign Affairs’ (or whatever title is given to the new foreign policy supremo) is expected to help solve this problem and reduce some inter-institutional tensions and bottlenecks. For example, it is desirable for all expenditure related to civilian crisis management (with the possible exception of the salaries of seconded national personnel) to be borne by the EU budget in a more transparent fashion. To this end, the relevant procedures have to be made less tortuous and more flexible. Secondly, expenditure for operations ‘having military or defence implications’ — in so far as it will remain distinct and separate from the rest — should be pooled in a more systematic, sustainable and explicit manner. Neither the current ‘ad hocery’ (as exemplified by EUPM and Concordia) nor the minimalist approach adopted by the Convention’s Praesidium (with the proposal of a subsidiary ‘start-up’ fund) address the essential issues. In fact, if a subsidiary budget has to be set up, then it should be more ambitious and create a long-term basis for covering all the ‘common costs’ arising from military operations. Such an EU Operational Fund could usefully draw upon the precedent of the European Development Fund and adopt a distinct ‘key’ for national contributions. Such a ‘key’ should take into account e.g. the member states’ ability to pay but also their ability to contribute in kind through the actual involvement of personnel and equipment in EU operations. It should also be periodically adjustable and help overcome potential ‘burden-sharing’ disputes inside the Union by setting agreed criteria against which to measure and assess national contributions without resorting to the crude GDP scale. At the same time, the Fund’s financial cycle should be the same as that of the EU budget. And, in perspective, the “common costs” thus covered should include also accommodation and transportation costs, especially if the Union develops common capabilities in the fields of strategic lift and logistics. By doing so, the EU would eventually have two main modalities for common operational expenditure at its disposal: the EU budget for all non-military aspects, and the Operational Fund. Both would guarantee a reliable financial perspective. If the separation between civilian and military aspects were ever to be bridged, their merger would not represent a problem. Thirdly, the European Parliament could consider reimbursing those member states who participate in ESDP operations a fixed somme forfaitaire to cover partially the per diems of their seconded personnel (civilian as well as military). Such reimbursement could be made through the EU budget annually, ex post facto, with no political conditions attached. On the one hand, it would prove that the EU budget covers not only internal benefits (agriculture and structural funds) but also external commitments. On the other, it would add transparency to ESDP in that the Parliament could organise hearings with experts and officials as well as plenary debates. For their part, the member states would gain an additional incentive – however modest – to provide adequate human resources for external operations. Finally, participating ‘third’ (and especially remaining and future candidate) countries could well be associated with all these arrangements, either case by case or more systematically. And none of the proposals outlined here necessarily require treaty change, although it would be preferable to insert some ‘enabling’ clauses in the Constitutional Treaty. All pro-posals, however, would require collaboration — rather than competition — between EU institutions.

The European Union and armaments: getting a bigger bang for the Euro